St Patrick’s College for Girls was established in 1840. It was the first school built by private enterprise in New South Wales and initiated by the Catholic people of the Campbelltown area in association with the priest responsible for the district, Fr Gould.

The congregation of the Sisters of the Good Samaritan of the Order of St Benedict was founded in Sydney by the first Archbishop, John Bede Polding, OSB on 2 February 1857. The foundation was made in response to a particular need in the growing colony of New South Wales, then in its sixty- ninth year. This new congregation, the first to be founded on Australian soil, was formed to care for disadvantaged and abused women. Polding, however, gave the congregation a broad and flexible scope in its mission. By giving the name, "Sisters of the Good Samaritan", he indicated that the Sisters were to have a Christ-like attitude of compassion and care for those they served.

From the very beginning, commitment to women and the education of young people – girls in particular - has been at the heart of the congregation’s mission. Sisters began teaching in a school in Sussex Street, Sydney in 1861. In subsequent decades, the ministry of Good Samaritan education spread to other Australian States and to Japan. Education in the faith and adult education are features of Good Samaritan ministry throughout Australia, in Japan, Kiribati and the Philippines.

Archbishop Polding, a Benedictine monk, instructed and cared for the sisters in the difficulties of the early years and gave them their Rules, which he based on the spirit of the Rule of St Benedict. His opening words in the Rules show the adaptability of the Congregation to times, places and needs.

This original school was built on three acres of land donated by Mary Sheil, wife of Dennis Sheil and daughter of local pioneer, William Bradbury, and named St Patrick’s. The original building still stands today and is now known as ‘Quandong’, which houses the Campbelltown Historic Exhibition, Tourist Information Centre and the St Patrick’s museum.

Teachers from the general community staffed this early St Patrick’s until 1887 when the Sisters of the Good Samaritan assumed responsibility for the school. In 1888, after the completion of the new St John’s church in Cordeaux Street, a convent and school was established at the ’old’ St John’s ‘on the hill’ building and took its name from the original St Patrick’s at ‘Quandong’.

The final change in location came in 1970 when St Patrick’s moved from ‘old’ St John’s to its present location. This site was originally a Preparatory School for Boys named St John’s or “Westview” and was also conducted by the Sisters of the Good Samaritan. From 1970 until today the College has continued to grow and now has an enrolment of over 720 students from Years 7 – 12.

While recognising the origin of the school and the contribution of both the members of the laity and the religious orders in the mission of the Church, the strong presence of the Good Samaritan Sisters at St Patrick’s for over one hundred and thirty years has contributed significantly to the heritage, tradition and spirituality of the school.

"This congregation of Religious is designed for the practice of the spiritual and temporal works of charity, under the guidance of holy obedience, according to the Rule of St Benedict. Therefore, as directed by their Superiors, they are ready to teach in schools, to visit and assist the sick in their own homes and in hospitals, to instruct ignorant persons in the faith, to conduct orphanages, to reform the lives of penitent women, and to apply themselves to every other charitable work."

They have responded with the adaptability desired by Polding when he asked them to be ready to apply themselves to “every other charitable work”. The Congregation has been involved in primary and secondary education, in teacher education, catechetical work, parish ministry, youth ministry, care of the socially handicapped, education of the intellectually handicapped and work with prayer and retreat groups.

"The Lord is My Light..." is the motto of St Patrick’s College. It is depicted on the College crest by the flame in the centre of the badge.

This motto is a reminder to us all that Christ is the centre of our life at the College. 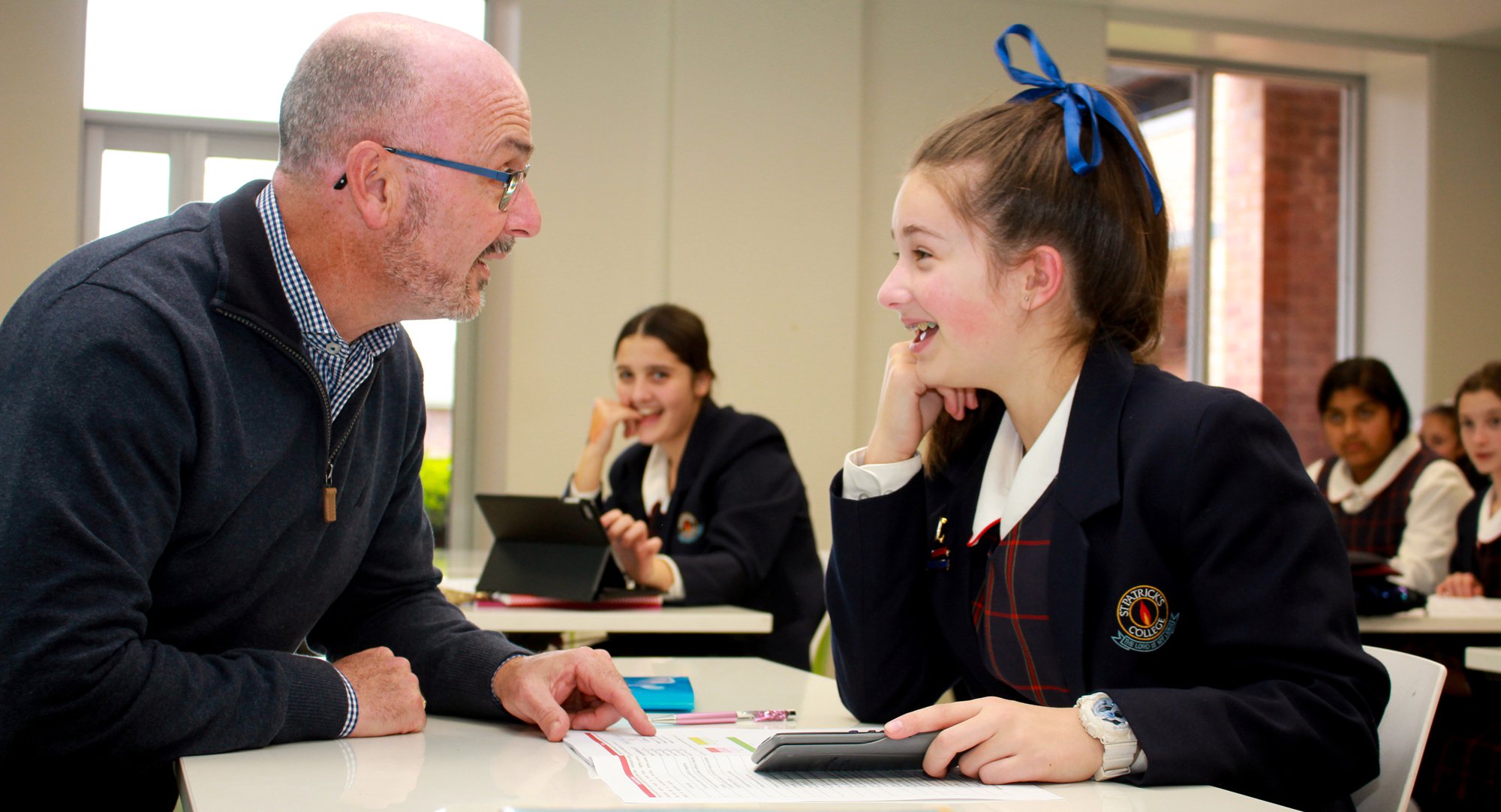 Meet the Principal
Join a College Tour
Learn more about our College
and meet students and staff.